Tucked between Jammu and Kashmir’s frosted peaks, beside sprawling valleys and blocks of human settlement, lie one of the most threatened ecosystems in the Himalaya – wetlands. The union territory is blessed with over 3,000 of these stunning, jewel-like, nutrient-rich freshwater bodies, a majority of which are just under three hectares in size. And yet, each of these wetlands is part of a life-giving biome that provides for the needs of millions of people and wildlife, and then some.

The Wildlife Conservation Fund (WCF) was founded in 2010 by Nadeem Qadri, environmental lawyer and currently Executive Director at WCF, to educate people about the many roles these high-altitude carbon sinks serve, and specifically to motivate the local community to protect the wetlands of Pampore in South Kashmir. The organisation comprises individuals from varying professions including science, business and law. “We are united by our drive to make a change, and we’ve been learning on the job for over a decade now. Much of our work involves pushing for legal and policy changes more than actual conservation science,” says Aamir Wali, who joined WCF as a volunteer in 2017, and currently serves as its CEO. Over the years, WCF broadened its horizons and now works to strengthen protection for the hangul deer, black bear, snow leopard and other species, primarily through awareness programmes, human-wildlife conflict mitigation, health camps, community initiatives, policy suggestions, on-ground patrolling, population assessments and more.

J&K’s life-giving wetlands have been under great ecological stress for decades. They are often treated as dumping grounds – unfiltered pollutants flow freely into the waters, and trash is unabashedly tossed into them. Nadeem grew up observing migratory waterbirds that frequent four wetlands in his hometown, Pampore – Fashkoori, Chatlam, Kranchu and Mainbug. Though protected by law as Wetland Reserves, the management of the waterbodies lay with the J&K Revenue Department. Nadeem began volunteering for wetland conservation at the age of 14, and continued lobbying for their protection when he became a lawyer. 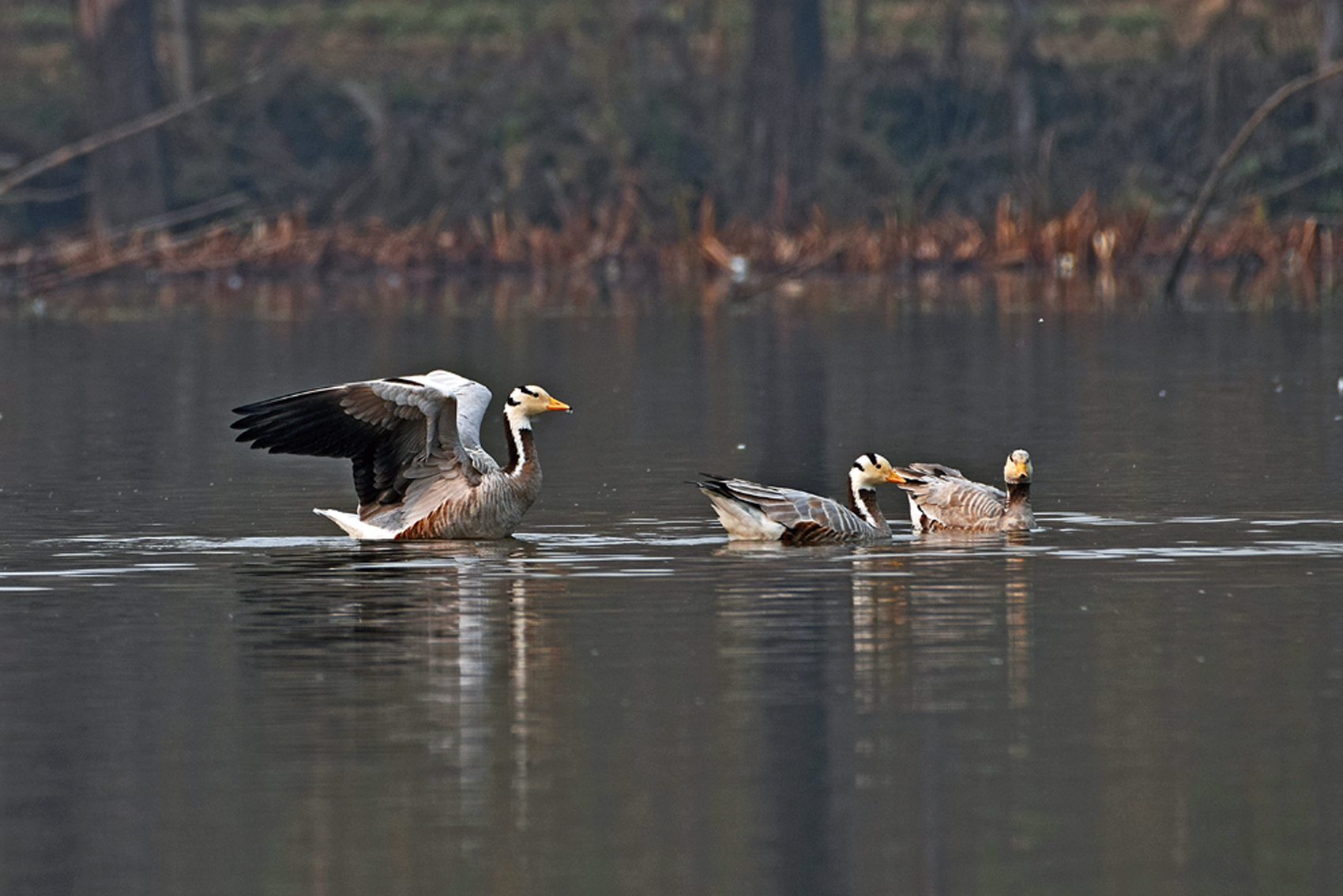 A pair of Bar-headed Geese in Pampore. In 2013, after conducting an assessment of 137 avian species of the Pampore wetlands, WCF prepared the first-ever independent species checklist of these and other wetlands in Kashmir. Photo: Rouf Rather.

In 2013, after conducting an assessment of 137 avian species of the Pampore wetlands, WCF prepared the first-ever independent species checklist of these and other wetlands in Kashmir. The wetlands were eventually handed over to the jurisdiction of the Wildlife Department, with WCF as their official, continuing conservation partner.

Encouragingly, while poaching continues unabated in some wetlands, not a single poaching case has since been recorded in Pampore, save for one bird that was seized outside the boundaries of the wetland reserve. The individual was immediately apprehended and sentenced to 15 days in the central jail.

Community awareness is integral to the mission, and addressed with consistent focus. The Jammu and Kashmir Bird Festival and Asian Waterbird Census are important annual events on WCF’s future calendar. The festival, on hold until the pandemic allows, will invite birdwatchers from across the country to exchange views and purpose through workshops, field visits, bird walks and round table discussions and webinars with colleagues across India.

The census is planned as a citizen-science initiative that will contribute to the larger International Waterbird Census, that would pool in observations and estimations on avian populations, assess wetland health efforts and the effectiveness of local conservation efforts. WCF also engages with community and forest and other state government officials on issues concerning wetland conservation, including anti-poaching strategies and community welfare.

One particularly significant success for WCF has been its ability to win support to secure the Khrew and Khonmoh Conservation Reserves, near the Dachigam National Park, a stronghold of the hangul. Around 20 of the endangered hangul deer were counted here. Nadeem continually emphasises the need to win the support of and create livelihoods for local communities by creating circumstances where their youth are able to benefit from biodiversity renewal in and around the periphery of the sanctuary. Towards this end, joint efforts with community representatives have paid off with a discernible reduction of pressure on
the species.

From the time it was formed, with sheer persistence, WCF has worked with the authorities and community to incentivise the relocation of the sheep breeding farm in the Dachigam National Park, which has resulted in more security and food availability for all manner of species including black bears, leopards and, of course, the hangul deer. They are now helping to monitor human-wildlife interactions in and around the park.

In the past decade WCF has linked social awareness, public opinion, departmental cooperation and legal steps, and this has been a key reason for its success. Through the COVID-19 crisis, the organisation, with help from partners and supporters has been able to engage local herders to patrol the fragile landscapes around Dara and Dachigam and it is expected that with every passing day, the results of such dedication will show up in the shape and form of stabilised populations of the wild species that are in truth the real caretakers of wild Kashmir.

A Pit Stop on the Central Asian Flyway

The wetlands of J&K ensure the water security of several human communities and provide livelihoods through fisheries, farming and tourism. They are a major stop for waterbirds of numerous species that travel along the Central Asian Flyway during their annual migration from breeding grounds in Siberia to diverse wintering grounds across Asia, including the Indian subcontinent, Maldives and the Middle East. The birds need staging grounds that are undisturbed. Healthy wetlands are well suited for this purpose as avians are able to rest, feed and gather strength before continuing on their arduous journeys. Several endangered species found in these wetlands include the Ferruginous Duck or White-eyed Pochard, Pallas’ Fish-eagle, Black-bellied Tern and White-headed Duck. As of now WCF has documented 137 avians, but this number is sure to rise as time goes by. Resources, including bird specialists, naturalists and ornithologists from organisations such as the Bombay Natural History Society are invited to help protect birds and bird habitats across Jammu, Kashmir and Ladakh.