Waiting in the Wings for the Swamp Prinia

As a wildlife researcher, finding an IUCN Red Listed Endangered species always gives rise to an extraordinary sense of satisfaction. While working on the grass birds of Assam and Arunachal Pradesh, with special emphasis on the Swamp Prinia, we observed that the states house a large avifaunal diversity, including varied endemic species. Since most grass birds in the Northeast are reclusive and cryptic, they are difficult to spot, and as a rookie in the field of ornithology, I was nervous and excited for this project.

Nestled in the Eastern Himalaya, Pasighat is a town beside the lovely Siang river, near the D’Ering Memorial Wildlife Sanctuary. This story is a composite of the traditions and culture of the local tribes in the area, my field notes on my journey in quest of the Swamp Prinia, and experiences in Pasighat. The Divisional Forest Officer (DFO), who I met at the beginning of my research project, provided me with accommodation in the Forest Rest House and offered to assist me in locating a temporary field station, which was subsequently set up with all necessities. Behind our field station, along the opposite bank of the Siang river, was the dense Pasighat Reserve Forest. 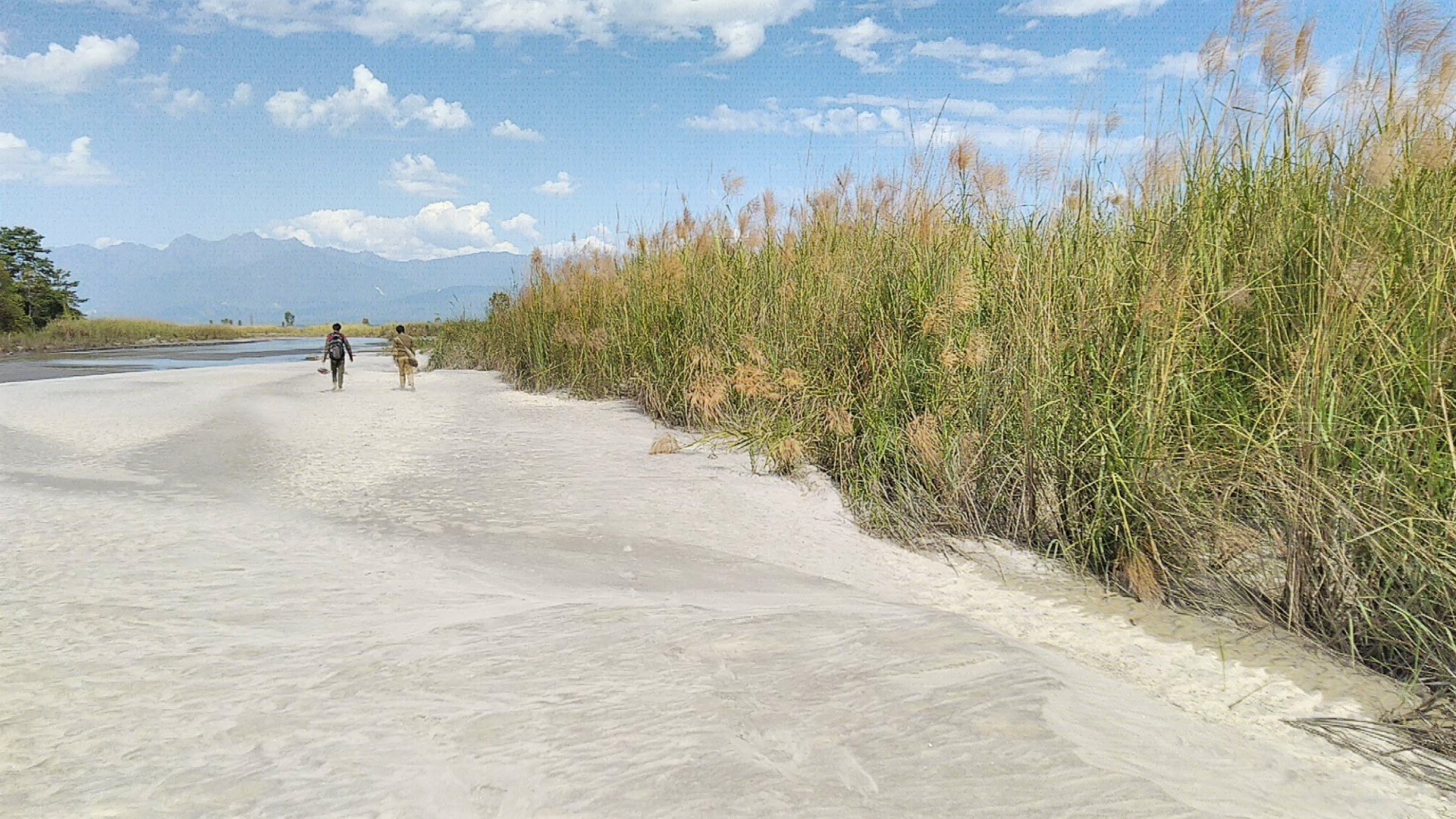 During my fieldwork in the Borguli Range of the D'Ering Memorial Wildlife Sanctuary, I met some remarkable people including the range officer, forest guards, and boat men who never failed to lend a helping hand. Because the river's entire topography changed following the previous year's flood and extensive silting, the machine boat was unusable and the only option was using the country boat, an extremely hazardous venture, considering the strong river current. The river crossing involved wading across an overturned muddy expanse of water (locally known as dalhdalh) to reach the grasslands to birdwatch. Crossing this dalhdalh was equally treacherous given the risk of being stuck waist-deep in mud. I relied on the forest guard and boatmen to lead me across these locations because they knew the perfect spot for a foothold. Recognising my nervousness, they would tease me about a potentially dangerous spot. They would also generously cook lunch for me.

The 194 sq. km. sanctuary is a birder’s paradise with the Jerdon's Babbler, Marsh Babbler, Black-breasted Parrotbill, and Striated Babbler among the rare grass birds found here. The  Swamp Prinia was particularly difficult to locate. Even after months of exploration, and persistent fieldwork, there was no sighting of the bird. Then, one morning around 8 a.m., while using the call playback* in a patch of grassland, we heard the same call echoing back from the tussocks. Initially, it was hard to believe our ears as it was the first time we were hearing this call but it was unmistakably that of the Swamp Prinia.

To get a good recording, we replayed the call, which the prinia reciprocated, but it was not visible anywhere. The range officer with me that day insisted that spotting the bird would soon be a reality.

That night, we celebrated with a special dinner. We sat under the stars, listening to the occasional calls of Oriental Scops-owl mingled with those of frogs and crickets. We could faintly hear the songs of the fishermen in their country boats, stationed in the river's hub for the night.
I had learned to drive a scooter and would frequently travel up the adjacent hills, along many orange gardens and waterfalls to gaze at the Siang river from various vantage points, which were particularly beautiful at dawn and dusk. Viewing the snow-capped Himalayan peaks from afar was mesmerising. 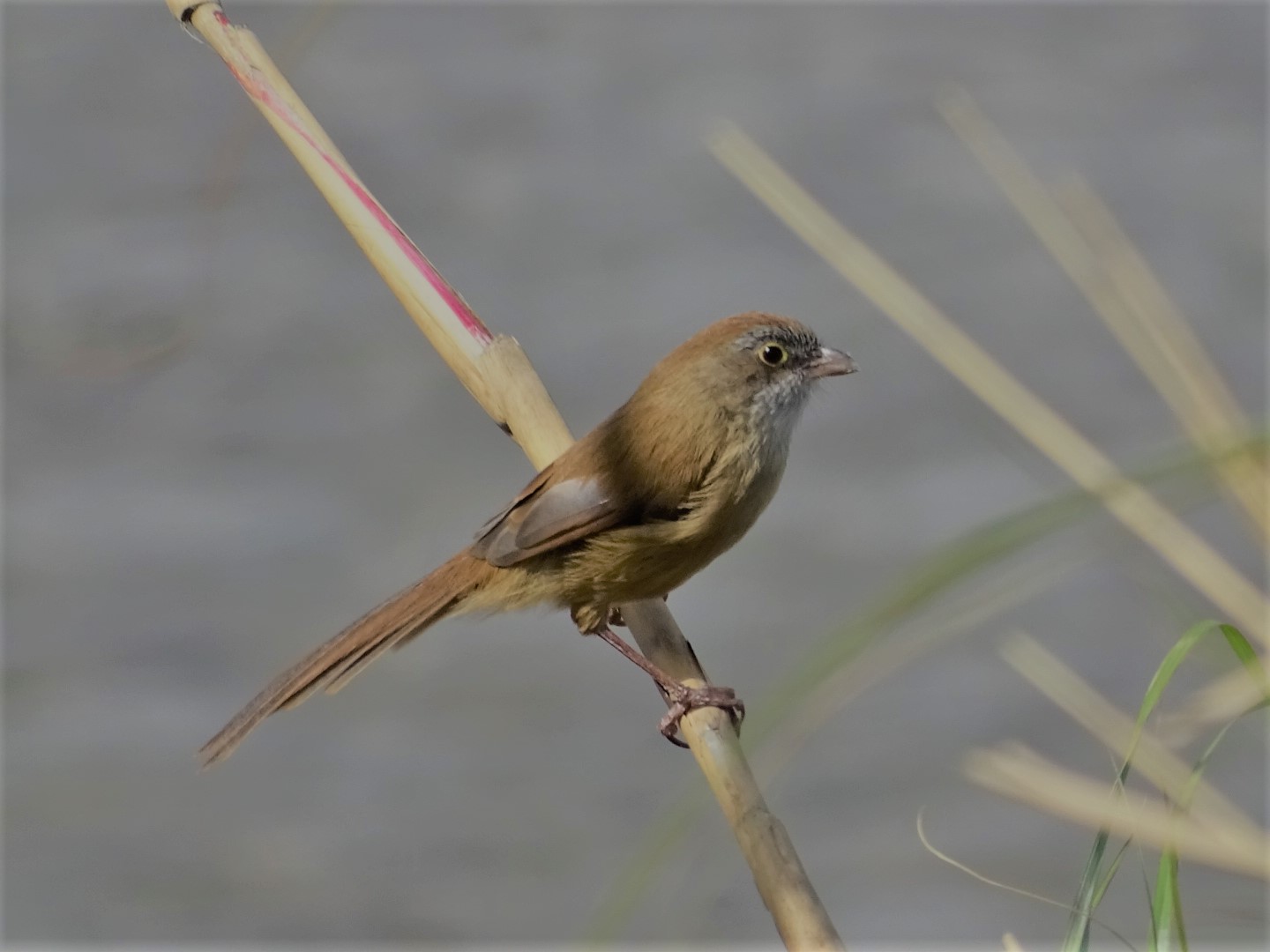 As our survey was nearing completion, I grew anxious that I was yet to see the bird. We proposed and then conducted an extended survey, beginning at daybreak and ending at dusk. It required a night stay near the sanctuary. The Range Officer took consent from the most experienced elderly person (Oki Modi) of an adjacent tribal village in the Borguli Range, to spend the night.  We were lucky to experience the tribal culture, custom, food, and lifestyle of the Adi tribes. We stayed in a big, unpartitioned hut with an exterior washroom, where Oki Modi and his family lived together. They arranged bedding for us and lit up the fireplace to keep us warm. Just before dinner was served, the male members offered us local drinks along with fresh fried fish even as the females regaled us with tribal songs while the children danced and invited us to join in. Overall, it was an unforgettable night.
By the time we wrapped up our survey in Borguli, we encountered our target species in several grass patches.

The last part of the grassbird survey was planned for two days in the Sibiamukh Range, quite a distance away from the field station. We were to stay at the forest camp tree house within the core area of the sanctuary, close to the grasslands. I had a wonderful view of the entire surroundings from the camp. During this survey, I came across the Bengal Florican for the first time, the Black Stork, Great Thick-knee, Marsh Sandgrouse, Common Stonechat, Jerdon’s Babbler, Yellow-bellied Prinia, Zitting Cisticola, among others.
On the last day of the survey at D’Ering, we hoped to sight the Swamp Prinia in the Sibiamukh range. The morning survey finished with no luck. Seeing the worry on my face, the forest guards and the boatmen quickly planned to carry out one last afternoon survey after lunch. Although we travelled through a similar habitat of the bird, there was no sight and call response from the elusive creature at any bend.

The guards stopped the boat at another patch and advised me to do the call playback for the last time. After playing the bird call once, one has to wait for 30 seconds for its response. Quite astoundingly, all of a sudden, the bird came out from the grass tussocks and responded incessantly, singing until we left. The guards were convinced the bird had come to bid goodbye and wish me a great future. 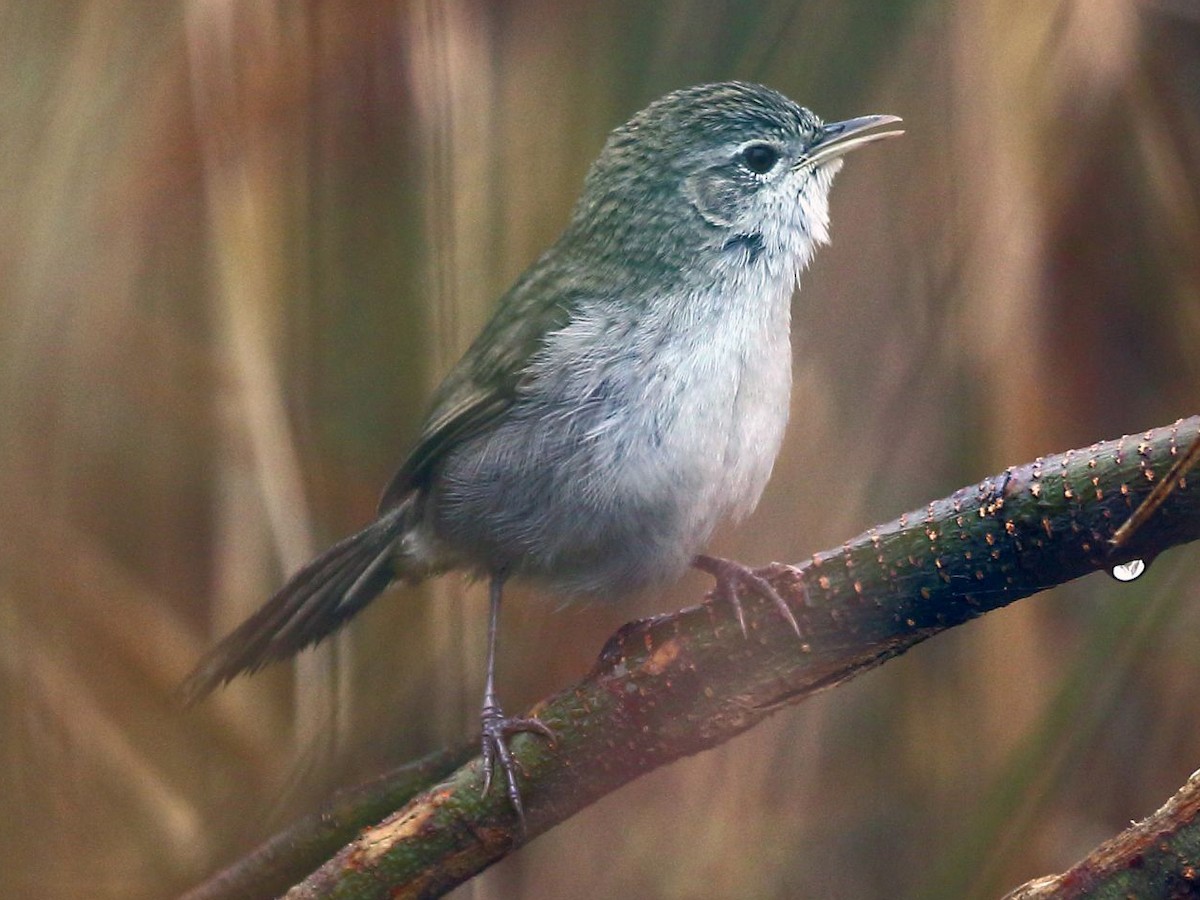 That night, we stayed up late. As we sat on the open roof terrace, we saw people burning grasslands nearby. Such burning endangers prime bird habitat. Grass birds are sometimes referred to as banjara and bairaagi because they have to shift from one patch to the other to survive. But what about the nests made around the grass tussocks? What about their eggs and offspring?

As I write this article, sitting in an apartment in the business capital of India, my mind flies, far from the concrete jungle to that forested patch of land in Arunachal where I was able to sight the Swamp Prinia.

Acknowledgment
Thanks to SACON and Dr. S Babu for giving me a fantastic opportunity to work on this project and to all of the project's biologists, particularly Harif Parengal, for the encouragement and support. Nandana Chaudhari and Nayan Sanowal, without you, none of this would have been possible.

Note
Experts recommend that tape-playback should not be used in protected places (sanctuaries and NPs) unless it is for approved scientific purposes. It should also not be permitted for species of conservation concern, especially in the breeding season.

Sarbasis Dutta is a Junior Research Fellow with the Bombay Natural History Society (BNHS). His area of interest is mainly birds and their behavioural aspects.