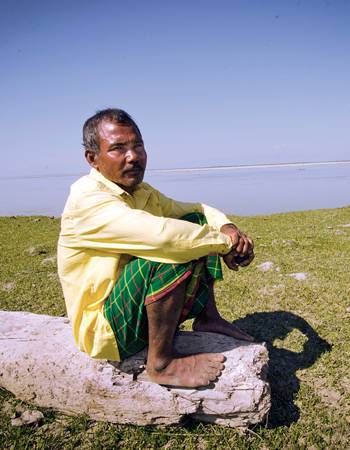 The stuff of Northeastern legend, Jadav Payeng’s story begins at the young age of sixteen, when he took over his family’s livestock, bought more, and started a small herd. His father told him that the dry Brahmaputra sandbar they lived on would turn fertile with the dung of their cattle. He was right. Without help from anything but nature, this forward-thinking man earned a living by ferrying milk for sale by boat from his nondescript sandbar.

Whenever he had a bit of surplus money, he would buy bamboo and other local sapling species and plant them lovingly on his sandbar. Something told him that plants alone would not be able to survive so, incredibly, he took to carrying ants from the mainland to his relatively tiny island. During one particularly vicious flood, more than a 100 snakes washed down by the waters died on his island. Reduced to tears, the heartbroken Payeng decided he would turn his island into a haven where all creatures could find sustenance. The end result of his endeavours is Mulai Kathoni, or Mulai’s Forest, where, apart from reptiles, all manners of insects, birds and mammals, including rhinos and tigers, have found safe haven. The man now sleeps just three hours a day, paddles his way to Ounachapori by three a.m., walks or cycles five kilometres to his livestock in the middle of the forest, cleaning, feeding and milking the animals, tending trees and caring for his land.

Today, some suggest that Mulai is obsessed! Not satisfied with greening just his own tiny ark, he exhorts villagers to do the same on part of their own lands.

The ‘Forest Man of Assam’ refuses to take much credit for all this. “It’s just the power of nature that has done this,” he says. When Sanctuary asked what motivates him after all these years, he turned philosophical, “A cup of tea in the winter, when the jhao grass dance to the clap of the kohua flowers, with wagtails running around, with the sound of the Brahmaputra waters lapping at my feet and my buffaloes lazing in the morning sun. Who can give me such riches other than nature?”

Jadav Payeng is a hero and he does not even know it.