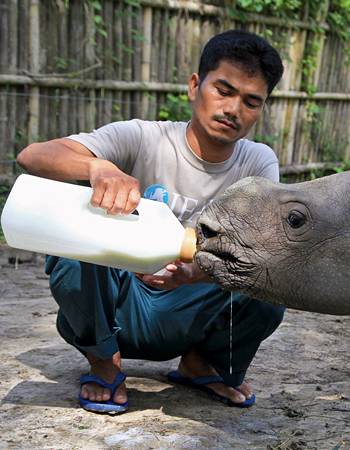 Maheshwar Basumatary (Ontai) Ontai is many people rolled up in one. Tracker, photographer, naturalist and wildlife defender, his education was secured in the school of hard knocks. Quiet, yet purposeful, he has had a rough time. Really rough. Born in Bodoland, an autonomous district in Assam, he grew up with strife all round, which forced him out of school. Married at 19, with no job in hand, he fell in with the wrong crowd and turned to helping poachers as a tracker. When his wife learned of his source of income and the dark life he led, she abandoned him, leaving him to deal with his own shattered life and two young children. Jolted, he turned adversity to advantage and changed the very course of his life.

He did a complete u-turn in 2005, surrendering to the Assam government and joining a community-based organisation (CBO) working to protect the forest. He never looked back. One positive step led to another until he was invited to join the International Fund for Animal Welfare – Wildlife Trust of India (IFAW-WTI) in 2009 as part of the Greater Manas Conservation Project. Tough and effective, he was even featured in a National Geographic documentary The Return of the Clouded Leopards and is currently hand-rearing orphaned rhino calves for reintroduction into Manas as a key part of the IFAW-WTI work force.

Working with the Assam Forest Department with other members of the Bodoland Forest Protection Force (BFPF) before joining IFAW-WTI, he helped apprehend five poachers in the Sanfan Range of Manas’ Kachugaon Forest Division. He works on a regular basis with a motivated network of locals to unearth arms and ammunition used for poaching for bush meat. Fearless, he and his team have come to be known as fierce protectors and when they challenged a gang of eight poachers they forced them to abandon their arms and ammunition and the wild meat they were carrying. An invaluable aid to researchers, he has helped survey elephants and golden langurs for the Forest Department in the Bodoland area.

For Ontai Basumatary, the fact that his 18-year-old son has followed in his footsteps and works for a CBO in Bodoland is a matter of great pride and personal satisfaction. Resolute, composed and strong, his ability to think clearly in difficult situations and his determination to protect the wild heritage of the Bodo people has earned him the nickname ‘Ontai’ or rock. He is an inspiration for a young India that aspires to repair the damage done to the natural world.