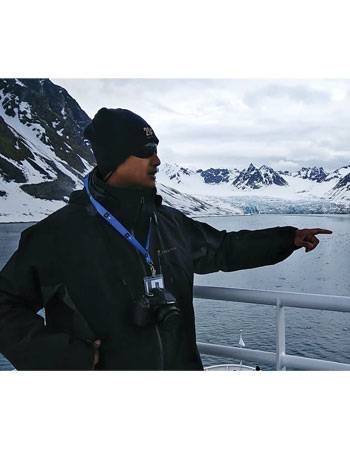 Inspired wildlifers, forest employees, researchers, villagers… anyone currently involved with nature conservation and the battle to protect our biosphere. Sanctuary searched for true heroes who display extraordinary courage, dedication and determination and set high personal standards for others to follow…

Robert Swan, the first man to have walked to both the North and South poles, made a crucial observation: The greatest threat to our planet is the belief that someone else will save it. Rituraj Phukan, who was invited for an expedition to Antarctica by Swan himself, and later accompanied him to the North polar region too, certainly does not hold this belief, and has been working tirelessly for the planet.

The extreme environment of Antarctica was the beginning of Rituraj’s own journey as a climate activist. From the polar frontiers of the Arctic and Antarctic, to the peaks and valleys of the Himalaya, and all across India, Rituraj had been observing the cascading impacts of climate change. There was no way he could be a silent witness. He quit his government job, and became a staunch, vocal advocate for the environment, and has been working as a climate activist since then. Rituraj wears multiple hats to drive forward awareness about the climate crisis. He is the Founder of the Indigenous People’s Climate Justice Forum, and Secretary of the Forest Man Foundation. He is a member of the International Union for Conservation of Nature, and sits on the board of civil society groups in the Americas, Europe and Australia, and a European Climate Pact Ambassador. He is the Chief Operating Officer for Walk for Water, the National Coordinator for Biodiversity, Climate Reality Project India and Secretary General of Green Guard Nature Organisation.

The global impact of climate change requires urgent global action and collaborations. Rituraj works with grassroots communities, students, businesses, legislators, bureaucracy, civil society and the media to create positive change. He was trained as a Climate Reality Leader by Nobel Laureate Al Gore and was featured in the former US Vice-President’s 2017 book An Inconvenient Sequel: Truth to Power.

Rituraj is a regular op-ed contributor on the climate and biodiversity crises for The Assam Tribune, and in publications across the world including the American Journal of Economies and Sociology, Earth Journalism Network, The Manila Times, Sanctuary Asia and Sanctuary Cub, Christian Science Monitor, Igniting Minds, and more!

Through his untiring speaking and teaching engagements in over a hundred educational institutes and at international fora, Rituraj focuses on warming, water and wildlife. He believes that “Water is the local issue of global climate change, for people and for biodiversity”.

A long-term vegan, Rituraj practices what he preaches and advocates that all of us begin by practising one positive way to reduce our negative impact on the planet. “If a lot of us do even a little, a lot gets done,” he says.