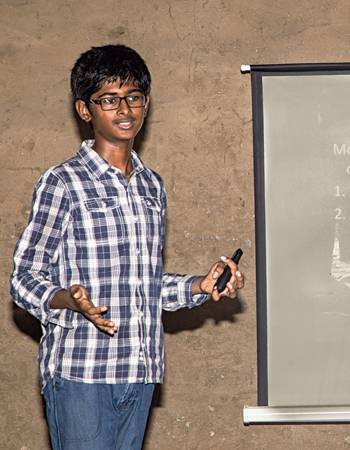 Vikas Madhav’s quest to unlock the mysteries of nature began when he was a toddler. An unquenchable curiosity for the natural world fired his young mind. Little creepy-crawlies attracted him at first, and then he was drawn towards the creatures of the ocean. By the time he was a class 1 student, he decided that it was the avian world that fascinated him most. Their proximity to his urban home probably had a lot to do with his decision, but his determination carried him much farther afield.

Today as a 15-year-old, class 10 student of Chennai’s Sishya School, Vikas has already ticked around 560 species of birds in India off his checklist and around 70 species of butterflies in Chennai alone. That places him on the very top of India’s naturalists’ mound! His intuitive ability to correctly identify birds with routine accuracy surprised Reginald Victor from the Centre for Environmental Studies and Research in Oman, who instantly paid for this young naturalist’s admission into the Oriental Bird Club, U.K.

His sighting of the vulnerable Indian Skimmer at Mudhaliar Kuppam in the Kanchipuram district of Tamil Nadu, the first in the state in modern times, and the second-most southerly sighting ever recorded, was published in Birding Asia in December 2010.

Vikas has extensively campaigned for the protection of the Pallikaranai marsh in Chennai, where degradation and encroachment is the order of the day, despite it being designated as a Protected Area. He wrote to the International Journal of Environmental Studies to draw the attention of the international birding community towards this haven for wildlife in the midst of the urban sprawl of Chennai. He managed to record as many as 64 species of water birds from the Odiyur Lagoon in two birding trips in December 2012 and February 2013, and his list featured prominently in a Rapid Assessment Study report conducted jointly by the Bombay Natural History Society (BNHS) and the Madras Naturalists’ Society (MNS), both organisations seeking to save the lagoon from the proposed Cheyyur Thermal Power Plant.

An avid writer, he is a classic example of the truth that age is no obstacle, provided you have the passion to perform. Vikas Madhav is already a conservation force to reckon with and is destined to be one of India’s key conservation voices for tomorrow.