"Conservation is 90 per cent Communication and 10 per cent Science": Sanjay Gubbi

Scientist, conservationist and writer, Sanjay Gubbi has merged wildlife biology, community outreach and natural history in his work in the Karnataka landscape for decades. He has walked thousands of kilometres to study animal life, worked with communities, bureaucrats and political leaders to increase Protected Area coverage, and once even faced a leopard during a conflict situation! Never one to be fazed, he continues to inspire rural and urban populations to endorse community-based, science-backed conservation. He talks to Abinaya Kalyanasundaram about his childhood, his latest book Leopard Diaries, and the future of the rosetted cat in India.

Growing up in the beautiful Tumkur landscape in Karnataka must have given you a nature-filled childhood.

Indeed! Part of the Deccan Plateau, Tumkur is a mix of grasslands, woodland savanna, dry evergreen forests and scrub jungles - all unique, endangered habitats with diverse wildlife including leopards, wolves, Indian fox, blackbucks, chinkara and more. I have roamed all these landscapes since I was young, climbing hilltops for spectacular views, watching wildlife whole-heartedly and sometimes from very close quarters. As a high school student, I joined the scout movement. We'd go camping, do nature studies, gaze at the stars and indulge in birdwatching.

All this built a solid foundation toward my understanding of ecosystems, and also exposed me to myriad conservation problems. Thus, a small group of friends and I set out to “educate” the people around our homes about conservation. We would go around villages with a rudimentary slide projector and screen tied to a Luna moped! But things didn’t go to plan. We were shouted at, chastised by the people, as they expressed their problems with crop-raiding wild pigs, macaques, and livestock lifting. These were my first learnings about human-wildlife conflict and on-ground conservation issues. I gleaned a lot through these interactions with village communities, politicians, media personnel and others. When I later began visiting Nagarahole, I became more interested in large mammal conservation… and now here I am.

The leopard has been the focus of your research since 2011. What about this animal intrigued you, and what do you seek to understand?

Leopards represent the polarity of wildlife conservation in India- they are loved by some, but also hated by many. They’re faced with a wide variety of threats, but they are grossly understudied and misunderstood. It is these gaps we are trying to fill.

We have published scientific papers about leopard poaching, the impacts of prey poaching, unconventional threats such as mortality due to vehicular accidents, snaring, falling in wells and even on the efficacy of policy on human-leopard conflict. We would like to expand our geographical spread to cover rainforest habitats to understand their population dynamics in such places. I hope our work will bring some focus on this species. 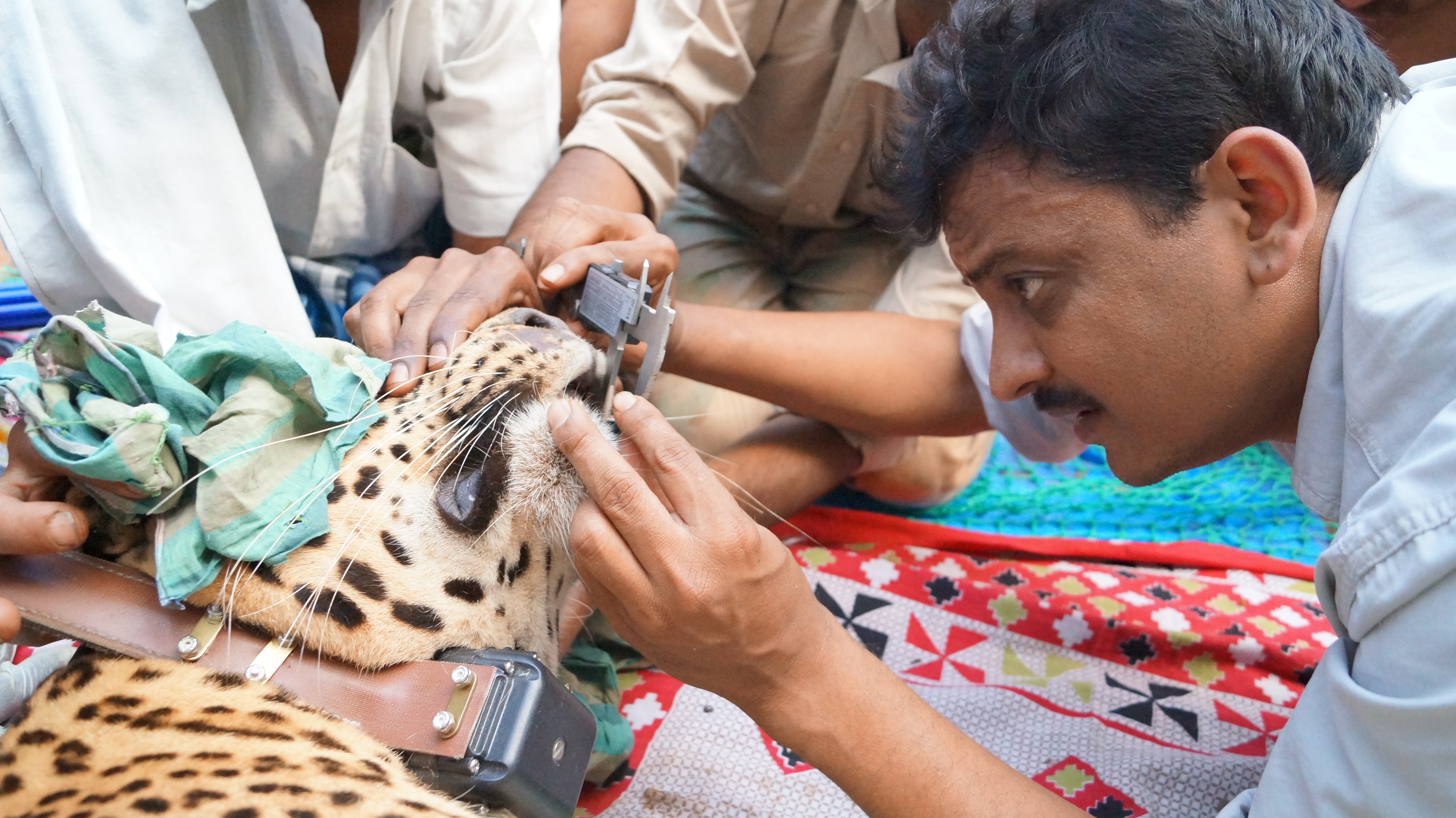 Sanjay Gubbi measuring the teeth of a radio-collared leopard. In Leopard Diaries, he writes: "I like to get my hands on the teeth, which are one of the most important body parts of a large carnivore, and hold a surprising amount of information." Photo: Arun Bastin.

You have covered over 24 areas in Karnataka in your surveys. What would you say were some of your most surprising discoveries?  Our camera trapping studies in 24 areas show that leopards are found even in small patches of natural habitats but at very low numbers. But if you calculate their densities, it will be very high. So density as a scientific benchmark is not a good indicator of leopard numbers in smaller areas or, for that matter, even for manmade habitats. In such areas absolute abundance is a true indicator.

Our occupancy studies across 24,000 sq. km clearly showed that natural, large prey are critical for leopards to peacefully co-exist with people. They also showed that poaching outside Protected Areas is eight times higher than within. Thus, it is no surprise that there is rising human-leopard conflict due to lack of large natural prey.

In addition, our study highlighted that natural habitats are still extremely vital for leopard conservation, though it is largely believed that man-made habitats like sugarcane fields are good enough for leopards.

Do you think the notion that leopards can thrive close to urban communities has been romanticised to the extent that it is now normalised?

Leopards have been living and continue to live where there is a mix of natural and man-made habitats. It’s unfortunate that it is projected as though they live in cities which is utterly not true. Leopards are not walking around the Gateway of India in Mumbai or around Vidhana Soudha in Bengaluru. They live on the outskirts of cities and venture to the edges to feed on domestic prey. It’s also projected that they live ‘happily’ in these man-made habitats but the number of threats they face in such habitats seem to be forgotten! Our recent paper showed that as the human density went beyond 225 people per sq. km., the number of incidences of leopards caught in snares drastically shot up, and the highest mortality due to snares was also in human-dominated areas.

Many human-made leopard habitats are recent and dynamic. For instance, sugarcane was cultivated at industrial scales in India only in the 1950s, and they are dynamic habitats that are harvested every few months. I feel natural habitats are still the best bet for our wildlife, especially those which are conflict-prone. But we have failed to focus on how much natural habitats leopards are losing daily, and how it is leading to more conflict situations. To deal with this we have changed the terminology to ‘negative interactions’ for academic discourses or for appeasing donors or award panels. But for those who are impacted by wildlife, it remains as conflict. Until we reduce conflict to tolerable limits all discourses will remain as romanticised metaphors. 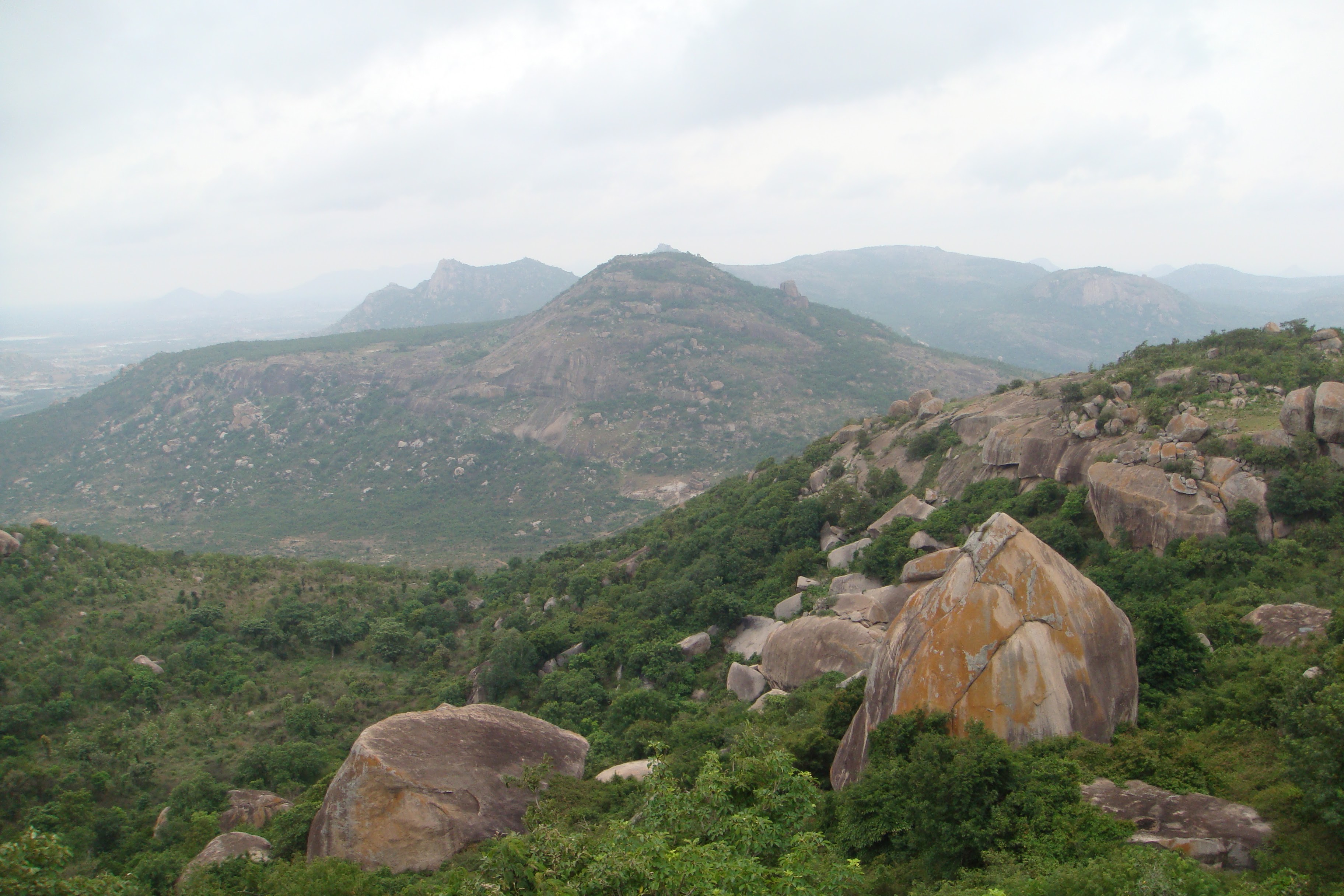 Rocky outcrops of the Deccan Plateau are critically important for the survival of leopards, especially outside Protected Areas. Photo: Sanjay Gubbi.

A recurring theme in Leopard Diaries is the need for both rural and urban awareness and education for children about nature and leopards, to reduce conflict.

Yes, awareness is critical to build support for conservation or to reduce human-wildlife conflict. Though some people have been living next door to conflict-prone wildlife species, heightened conflict incidences, leading to loss of life and livelihoods, wrongful projection by the media, proliferation of social media, and fake news have all increased negativity towards wildlife. Hence awareness can bring in some amount of balance.

However, the current outreach material and focus has been urban-centric. For instance, most nature interpretation centres are built with tourists in mind, and the same applies for human-wildlife conflict material. We need to change this stereotypical mindset and bring it to the people who bear the brunt of conservation.

You’ve used camera-trapping, radio telemetry and other tools in your research. How do you feel technological advancements have propelled animal biology research in recent years?

While technological advancements are very helpful in wildlife studies and have helped in various human-wildlife conflict situations, they need to become affordable for widespread use. For instance, camera traps costs over Rs. 15,000, and researchers need them in hundreds!

We also need to remember that technology is only a tool and not a solution. Like in many other fields, wildlife biology is getting over-enamoured with technology and losing the most fascinating part – natural history observations. Natural history observations are like fine art, they inspire and motivate the public, which even the most complicated statistically-driven scientific paper cannot do. Hence, we need to spend more time in the field observing and understanding the species than hovering over a screen. 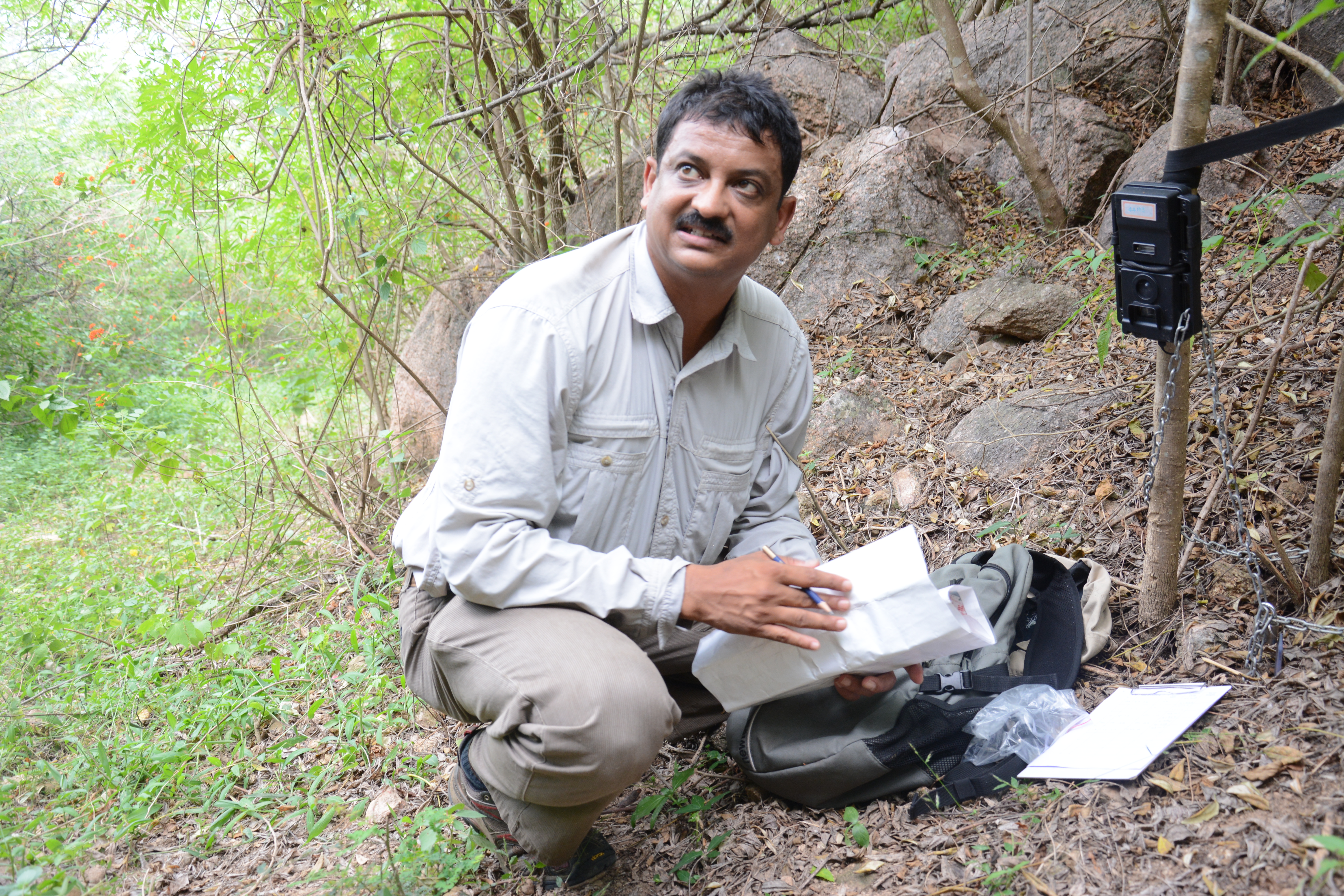 Leopard deaths due to vehicle accidents across the country is a disturbing rising trend. How can linear intrusions through wildlife areas be addressed?

Our earlier work showed that the highest number of leopards killed due to vehicular accidents were in human-dominated landscapes and in reserved forests. Infrastructure development has to consider mitigation measures in these areas right at the level of planning. At the same time we need to avoid any new linear infrastructure development in Protected Areas and if there is a possibility to decommission the existing ones and provide alternatives.

Tell us more about your writing pursuits. Your books in Kannada have a wide readership!

Yes, the three books I’ve written in Kannada -- VanyajeeVigala Jaadu Hididu (In the Trail of Wildlife), Shaalege Banda Chirate Mattu Itara Kathegalu (The Leopard That Came to the School and Other Stories), Vanyajeevigala Ramyaloka (The Fascinating World of Wildlife) -- have gone into multiple prints. This has been very satisfying as many young people from remote parts of the state write to me about how the books cultivated a profound interest in nature and wildlife in them.
Writing in regional languages is of utmost importance as it reaches and encourages people from rural and semi-rural areas. Unfortunately, India’s conservation field is dominated by metro-educated, socially and economically privileged classes. People form rural and semi-rural areas, where people have to live with wildlife, find it hard to get their voices heard. I will continue my pursuit to encourage this sector of conservation enthusiasts through my Kannada writing.

In addition to Leopard Diaries, I’ve also penned two other books in English -- Second Nature: Saving Tiger Landscapes in the Twenty-First Century is all about on-ground conservation and how it works in a country like India; and The Land of the Honey Badger, a bi-lingual coffee table book highlighting the Cauvery-Male Mahadeshwara Hills landscape. 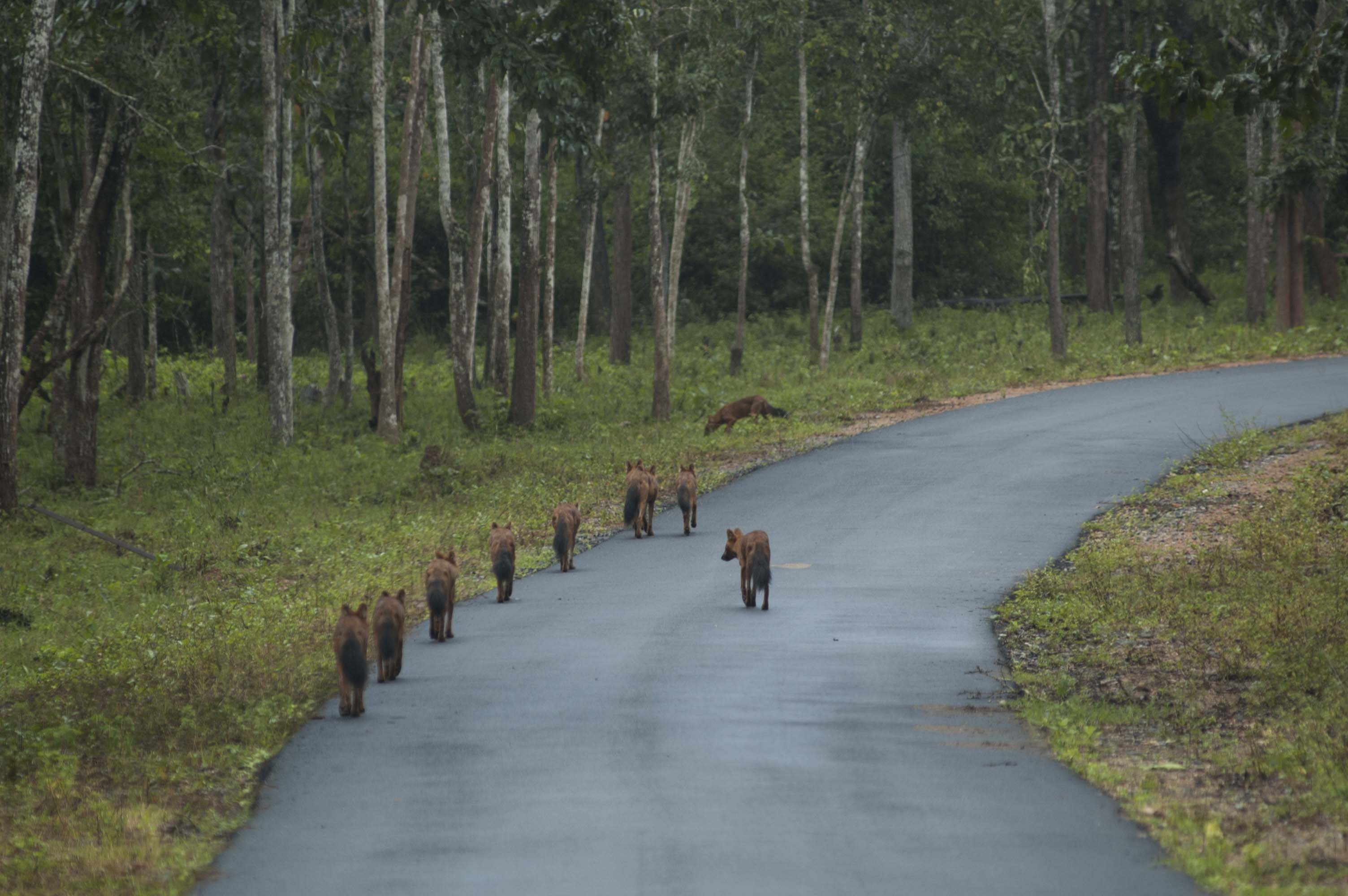 You have succeeded in increasing the geographical area under protection in the Karnataka from 3.8 per cent to 5.5 per cent during your fifteen-year tenure. An incredible feat!

It was the result of collaborative teamwork with supportive bureaucrats and political leaders. I think this can be considered the golden period for this activity in Karnataka. We managed to connect 23 Protected Areas and we continue in pursuit of more! One day I dream that Bannerghatta National Park adjoining Bengaluru will be connected to Bhimghad Wildlife Sanctuary bordering Goa through a network of contiguous Protected Areas.

Surely working with and establishing a good rapport with people must be vital to such extensive work. Please share your thoughts on navigating this for upcoming conservation biologists.

Wildlife conservation is 90 per cent communication and 10 per cent science. Communicating to everyone in a language they understand is critical to success. For on-ground conservation work, we need to be like leopards - highly adaptable. One needs be able to work with communities, bureaucrats, political and social leaders, and media personnel. They need to believe in you, and this happens only through long-term relationship building. Conservation is not like an IPL match, it’s like test cricket; most times there is a draw, at times we lose, and occasionally we win. To win, we need a lot of patience and perseverance. Please remember conservation is never a project, it’s a lifetime’s journey.

It also requires a good understanding of wildlife and conservation policies, how to prioritise and focus on what issues to fight, and how to work through our highly complicated society. Mere social media outbursts or demonstrating helplessness within conservation friends will not solve any conservation problem.

What is your hope for the future of the leopard in India?

Leopard research so far has focused either on Protected Areas or human-dominated landscapes. We need to focus on comparative studies to understand the larger picture on leopards. One interesting aspect would be to compare stress levels in leopards living within natural and human-made habitats.

In India, if there’s any large carnivore that can survive the 21st Century it is the leopard. Its inherent characteristic is primed for ultimate survival, but only if we spare its natural habitats and prey. 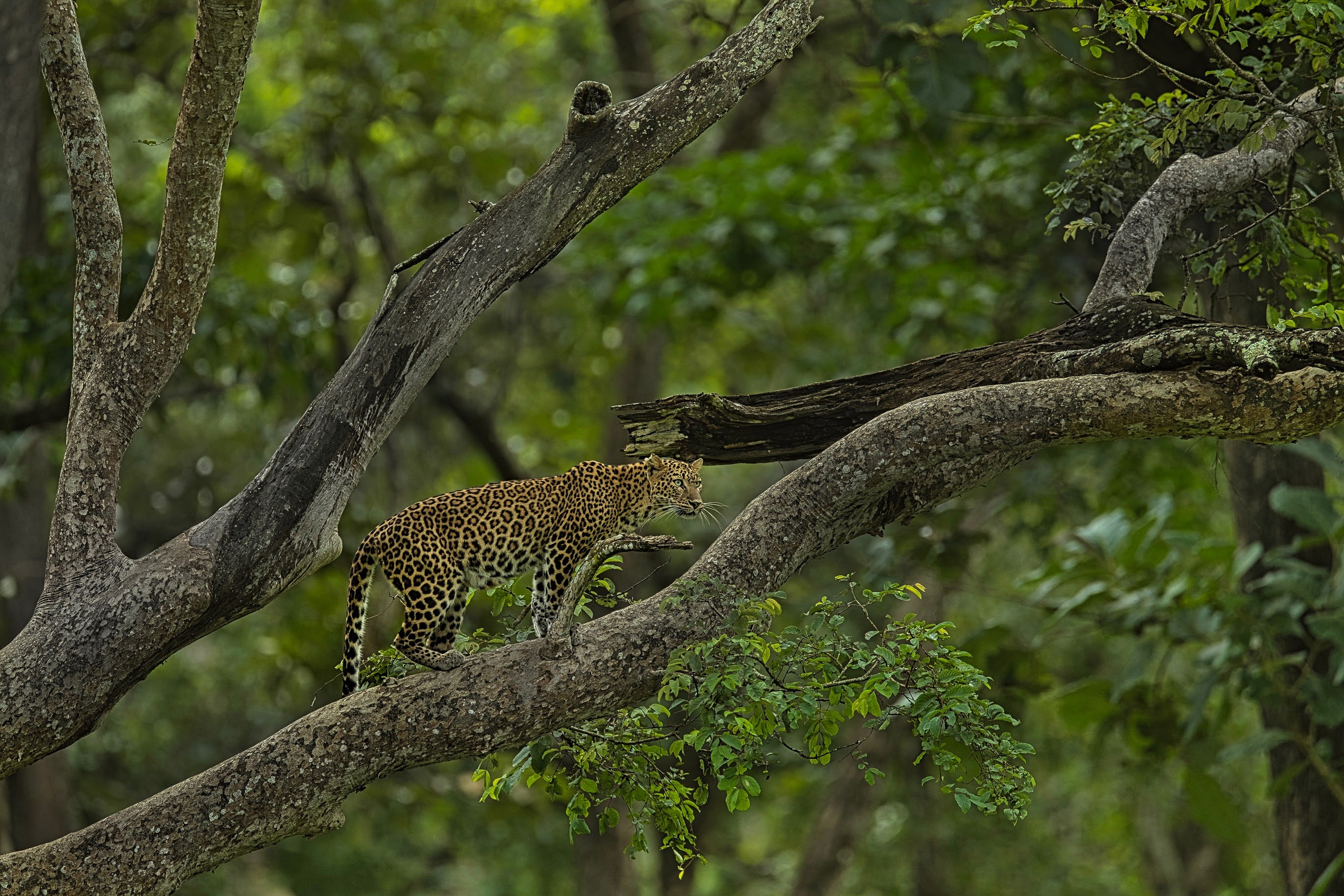 “Leopards are a mixture of several natural aspects – social but solitary, inconspicuous but significant in numbers, large but ubiquitous; they don’t fit into any of the standard pigeonholes of large-cat conservation.” - Sanjay Gubbi, Leopard Diaries. Photo: Arun Kumar.

Abinaya Kalyanasundaram is a writer, editor and photographer who loves creating narratives about the natural world. She is Assistant Editor at Sanctuary.